Internet crimes can lead to prison

Internet crimes such as online luring of a child, sexual exploitation of a child, and enticement of a child are very serious charges which can have devastating effects on your future.  What starts as an innocent chat with a person in a chat room for people over 18 can lead to dire consequences.

Internet crimes are felonies, which carry potential lengthy prison sentences. They also carry the possibility of lifetime registration as a sex offender, lengthy sex offender treatment, loss of the right to spend time with your children and required lifetime supervision.

Anybody under the age of 15 is deemed a child. Unless the person chatting is within 4 years of the age of 15, any sexual contact may be construed as sex assault. Purchasing sex from a person under the age 18 is considered patronizing a child prostitution, which carries catastrophic consequences.

Often the fact that the poser is under the age of 15 is overlooked as the conversation proceeds at a very adult level. Many adults are arrested by police when they attempt to meet the person who was posing as a minor. They are usually charged with Internet luring of a child to commit sex acts and attempted sex assault on a child. The defense for many sex crimes related to chat room conversations is denial or entrapment because police officers posing as minors often aggressively pursue meeting the adult.

Get a free consultation

Unfortunately, the Internet can be a very dangerous place. Surfing innocent websites can lead to dangerous consequences. The police often monitor known sites that carry child pornography. With the information from the IP transmission, law enforcement agents often obtain warrants for the IP address of the computer user.  This information leads to a knock on the door and searches of computers, modems and laptops for evidence of child pornography.

If you are being investigated or being charged with possessing or distributing child pornography or some other Internet sex crime, you need an experienced cyber crime defense attorney skilled in defending these cases. If you are contacted by law enforcement, contact an attorney immediately. 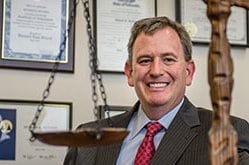 If you have been charged with Internet luring or exploitation of a minor or distribution of child pornography based on conduct on the Internet, get an internet crimes defense attorney who is experienced in handling these matters. Richard Huttner is an experienced Denver Criminal Defense Attorney who handles all kinds of Internet sex crime cases. Set up a free consultation with Richard to begin your defense.